skip to main | skip to sidebar

Waking Up With KTLA Morning News By Ryley Mueller 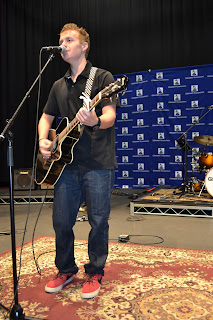 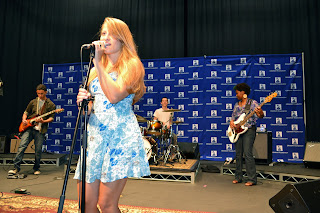 Waking up at four a.m. is not how I usually like to start my day, but this morning I was given the opportunity to be featured on "KTLA Morning News" along with my fellow Music Journalists; Alexandrea Kern, Mia Lepp, Allison Spice, and Ben LoPiccolo. We all traveled to Carson Hall to film the third segment KTLA has aired about the GRAMMY Camp® program.

Students, staff, and KTLA broadcasters and electronic technicians gathered to capture the Campers in the most real state of mind. I had no idea what to expect but I was ready to be myself and speak about my experiences thus far.

The band, Lena Stein and Luke Niccoli of the Songwriter track, Bass' Satarra Troutman, Keyboard's Evan Rees, and Guitar's Ben Glasser, started playing a catchy country-pop song, "Summer Love," that, despite the early hour, sounded well rehearsed and soon the band had the room full of their rich sound.

I was primarily taking photos and video of the band while the other Journalists interviewed, took notes, and recorded the event. I was able to get up front shots of Stein and Niccoli, and film some video of the band. I was truly impressed by the talent they all displayed.

KTLA highlighted the Audio Engineers, as well. It was really cool to be able to show the world (or the greater LA area) this amazing Camp. Allie MacKay, a reporter for KTLA, talked to us about our skills, what we love about GRAMMY Camp and how we work with musicians.

I have always been interested in the broadcasting portion of journalism, so for me to actually be on the news was very exciting.

Posted by The GRAMMY Foundation® at 1:32 PM

GRAMMY in the Schools

Promote Your Page Too

The GRAMMY Foundation®
The GRAMMY Foundation® was established in 1989 to cultivate the understanding, appreciation and advancement of the contribution of recorded music to American culture — from the artistic and technical legends of the past to the still unimagined musical breakthroughs of future generations of music professionals. The Foundation accomplishes this mission through programs and activities that engage the music industry and cultural community as well as the general public. The Foundation works in partnership year-round with its founder, The Recording Academy®, to bring national attention to important issues such as the value and impact of music and arts education and the urgency of preserving our rich cultural heritage. For more information, please visit www.grammyfoundation.com.